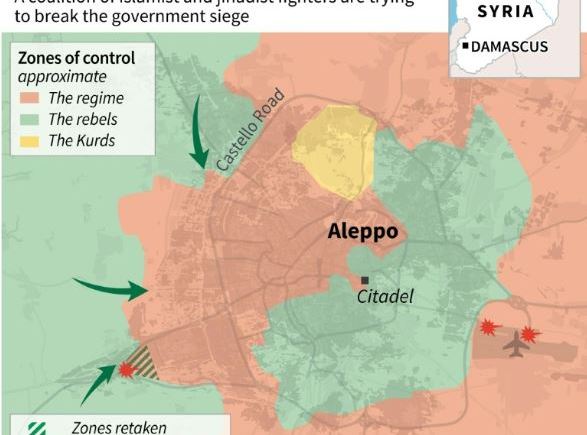 Now we have “war crimes” charges bouncing around about the rebel effort to break the Syrian government siege of the rebel-held part of Aleppo. But what do we really know? I discussed that vital question a few minutes ago with host P.J. Maloney on KQV News Radio in Pittsburgh.

The problem is–news from Syria is mostly second hand. There are few actual foreign correspondents in Syria, and those who are there face dangers, limitations and problems every inch of the way. So news outlets rely on other sources. The most prominent is the London-based Syrian Observatory for Human Rights. If you look at the bottom of the map I’ve attached to this post, you’ll see that it’s been printed by Agence France Presse, a leading news agency, but the source is SOHR. Syrian Observatory for Human Rights.

I’m not implying that SOHR is unreliable, but its agenda is not that of a journalist. It’s a human rights organization, and most of its sources are on the rebel side. It’s usually impossible to cross-check and verify information coming out of Syria, so we go with what we have.

The have been  failures. Several years ago, news agencies circulated a video that seemed to show Syrian troops burying rebels alive. That turned out to be a fake. Other scenes have been staged–sometimes they’re caught before news agencies out them out, and sometimes not. Often it’s hard to tell.

This is a region-wide issue. There’s only one nation in the region where reporters are free to operate within understandable limits, and that’s Israel. The limits apply to military operations as they are happening and similar scenarios, and even those limits can be breached easily in the age of the Internet.

Others in the region are much more efficient in controlling what you (and their own citizens) know. They threaten reporters, jail them, threaten their families. You don’t hear about that, because even disclosing the intimidation could put local reporters at risk. Here’s more about intimidation of reporters.

All we can do is look carefully at what we’re reading and try to figure out where it’s coming from. It’s not a substitute for Western-style journalism standards–but it’s all we’ve got.

While we’re reading the typical horse-race accounts of the battle for Mosul–which forces are where, who’s getting closer, who’s winning, who’s losing–there’s a much bigger threat just 25 miles away–the Mosul Dam. I discussed this issue a few minutes ago with host P.J. Maloney on KQV News Radio in Pittsburgh.

The dam is nine times as long as the Hoover Dam, which supplies electricity and water to southern California. The dam itself is OK, but it’s built on porous,

unstable rock, and it needs constant maintenance to the tune of two tons of concrete a day.

If this dam collapses–or , unthinkable as it might seem, if it’s sabotaged, the Tigris River stretching 20 miles back from the dam could flood a whole area of Iraq, and millions could be killed. That would be one of the worst disasters, or the worst terrorist attack, in history. It should be a priority, and I believe this is well understood, to keep this from happening.

While we’re at it, the superficial coverage on  the basis of who’s winning and who’s losing in Mosul follows the outdated assumption of World War II-era conflicts that there’s always a clear winner and a clear loser. That won’t happen this time, as my friend and ace reporter Nancy Youssef points out in this article, noting that top US army commanders seem to get that, even of the Secretary of Defense doesn’t. She tells us that ISIS is getting ready for a guerrilla war, which would bring us practically full circle to the situation we faced in 2004. That’s progress…

Funny thing happened after my live analysis on KQV News Radio on Monday. We talked about the war in Yemen, and the fact that even a massacre of 140 people after the funeral of the father of a Cabinet minister doesn’t get coverage, despite the fact that the Yemen civil war is a dangerous proxy battle between Saudi Arabia and Iran and has left millions of civilians in desperate need of food and aid.

Within hours, the news agency I used to work for picked up the story, and since then, Yemen has been in the news. I know they’re listening to me (don’t ask me how I know), and of course, three missiles were fired from Yemen at American warships, and the US retaliated. That’s what I talked about a few minutes on KQV with host P.J. Maloney.

So if I helped get this story into the news, even a little bit, I’m pleased.

I’m not at all pleased that once again, the US is treating this as a military problem. The Yemen crisis must be solved diplomatically, and with its new agreement with Iran, the US has the ability to engage Iran and veteran American ally Saudi Arabia in talks to get this settled before it gets totally out of hand.

Instead, there’s a lot of braying on social media and elsewhere about how the Iran deal is bad, bad, bad, and the Iranians are acting like…well, fill in the blank. As I wrote here and in other places, we cannot expect Iran to change its behavior overnight, but we can expect the US and the West to adopt a mature policy and help nudge Iran in the right direction. If the deal fails, all of us lose, including the critics who seem so eager to be proven “right.”

Even the weekend bombing of a funeral in the capital of Yemen that killed 140 people and wounded hundreds apparently hasn’t been enough to propel the proxy Saudi Arabia-Iran conflict into the headlines. I discussed the Yemen situation a few minutes ago on KQV News Radio in Pittsburgh with host Bob Bartolomeo.

The US is involved in this up to its eyebrows, and Washington is getting more and more uncomfortable with it. The civil war started in 2015, when Houthi rebels ousted the government of the US-backed president, who replaced a US-backed tyrant who resigned under pressure of mass demonstrations of the Arab Spring variety.

Now Saudi Arabia is fighting the Houthis, who are Shiites aligned with Iran, and they’re using weapons they bought from the United States. It’s likely that US-made warplanes bombed that funeral.

Once again, the US is caught up in a no-win situation in the Mideast, because there are no good guys in the Yemen conflict, only combatants and civilian victims–10,000 dead so far, and millions in desperate need of food and other aid. Children are starving, the country has collapsed, but no one seems to notice.

They might notice if this escalates into a war between Saudi Arabia and Iran, which is not out of the question, and then there will be many politicians in the West who will ask, where did THAT come from? Now you know.