Turkish President Erdogan storms off the stage after berating Israeli President Peres in Davis, Switzerland in 2009

attack Israel, just as Israel and Turkey are close to restoring full relations after a five-year crisis. There’s a link here, and I discussed it a few minutes ago with host P.J. Maloney on KQV Radio in Pittsburgh. ISIS is in trouble, and the go-to move in such circumstances is to try to draw Israel into the battle. Likewise, when Turkey reoriented its attention from Europe toward the Arab world, its first step was to turn hostile toward Israel.

Now Turkey’s interests are changing, and a rapprochement with Israel is in its interest. Not surprisingly, opposition is coming from Israel’s right wing, calling this a deal with the devil because of Turkey’s recent history of hostility and support for groups like the Muslim Brotherhood.

Israel’s right, including the present government, has made a career out of scaring its people over every possible threat, real and imagined. The guiding philosophy is that the whole world is against Israel, and Israel must always be on the defensive. But now, when one of the threats–Turkey–can be removed from the list, even temporarily, elements of the right oppose the move. That sounds to me like that old description of the classic ideologue: “My mind is made up, don’t confuse me with facts.” There’s a lot of that going around…

Bethlehem is a sad place this year for Christmas–again. A wave of 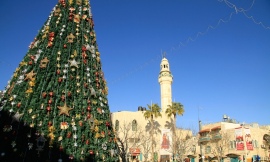 violence involving Israel and Palestinians has frightened tourists and pilgrims away. It seems to happen almost every year. Palestinians automatically blame Israel, but I wonder why it is that whenever violence erupts, it’s always in the late fall. Coincidence? I discussed Christmas in Bethlehem a few minutes ago with host P.J. Maloney on KQV Radio in Pittsburgh.

I’m planning a lecture tour in the US around the second half of March through the first week of April. Topics include Mideast media bias, BDS, Iran, ISIS, Egypt…here’s a flyer. Please PM me if you can put me in touch with a sponsor out your way.

A three-day weekend conference in Saudi Arabia of Syrian opposition

groups produced a joint statement to be taken to the next round of peace talks in Vienna. But that’s a lot smaller deal than it sounds. The groups are already squabbling about what it means, just as they’ve been at each others’ throats all along, sometimes on the battlefield–and look at the makeup of the conference. ISIS wasn’t there, of course, since ISIS isn’t exactly welcome in Saudi Arabia–but an al-Qaida affiliate was. As I just told host P.J. Maloney on KQV Radio in Pittsburgh–this is crazy.

Not much has changed since 2011, when mass demonstrations led to the overthrow of dictator Hosni Mubarak. The West attributed the success to Facebook and Twitter campaigns, missing the broader picture–including the fact that only a third of Egyptians have access to the Internet. I devoted much of my book, Broken Spring, to explaining how and why the West got it wrong.

It could well be that the Twitterati triggered the uprising of 2011, but they’re not likely to trigger another one now, because strongman Abdel Fattah el-Sisi is in firm control and still has considerable public support–or at the least, benefits from the apathy and public fatigue from four years of political and economic turmoil. As always, Nancy Youssef gives us the whole picture from street level.

This article by my friend and star reporter, Nancy Youssef, lays it all

out–the US policy of air strikes and special forces won’t defeat ISIS. If the US military wants to get serious, it needs more intelligence assets, and that means more ground forces to secure “clean” areas.

That’s a recipe for disaster that has already played itself out in Iraq. In this article, a Sunni representative states the obvious–ISIS will be defeated only when the people rise up against it:

“It’s a fact of life, ISIS won’t be pushed out of Iraq without Sunni help,” said Mark Alsalih, a Sunni lobbyist in Washington and the president of the Iraq Stability and Security Program, composed of citizens and tribal sheikhs.

“The sheikhs I talk to say they could to it in a few weeks, not months. A lot of people in those towns [that ISIS occupies] could just turn against ISIS. The only thing holding them back is they don’t have an agreement with the U.S. or the Iraqi government about their demands,” Alsalih said.

You keep reading that here, too–the West cannot fight this fight and win.

Here’s a poll by the Pew Research Center that shows that Muslims really don’t like ISIS. It’s interesting…but we have to take into account that in non-democratic countries, responders tend to tell pollsters what they think the regime wants to hear–so a simple one-question poll won’t get reliable results. it looks to me like this Pew poll is a one-question poll. They should know better. Chapter 2 of Broken Spring explains this in depth.

Thanks to Bob Reid for sharing this poll.

Lashing out will not fix the San Bernardino atrocity–it will make it worse. This exchange on KQV Radio in Pittsburgh a few minutes ago is apparently rare–as host P.J. Maloney says, after a terrorist attack like that, you want to go kill somebody. I’m explaining that you can’t “kill” ISIS militarily, and the link between ISIS and San Bernardino isn’t that direct. We start by discussing President Obama’s address to the nation about the attack, and  the misconception that ISIS was directly responsible–he didn’t say that at all, but that’s how some of the reporting is interpreting it.

A personal note–in 1968, I worked at the Riverside Press-Enterprise newspaper, just down the road from San Bernardino, the only time I worked outside the Midwest before I moved to Israel in 1972. San Bernardino has seen some tough times since then–perhaps someone will pay attention to its problems now.