After all my unprecedented (for me) baring my political views in public, I’m getting ready to put my vote where my keyboard is. Are you?

Facebook refused to let me promote my latest article, about the Trump-Kim summit, unless I agreed to label it a “political ad.” Well, you can imagine my reaction to that.

Turns out I’m not alone. You have to read all the way to the bottom of this Columbia Journalism Review article to get an action recommendation–stop advertising on Facebook. the problem is, it seems that Facebook is still the best tool for getting the word out, which is what we book-writing types try to do…any suggestions?

Even as Facebook tries to solve one problem—namely, accusations that it isn’t transparent enough about the ads it runs on the platform—it seems to have created another one. Publishers are up in arms over the fact that the social network plans to treat certain promoted news stories as though they are political ads, and they’ve made their feelings known in a number of ways. A group of media organizations have sent Facebook a letter expressing their dissatisfaction, and New York Times CEO Mark Thompson vented on the subject at an event organized by Columbia University’s Tow Center for Digital Journalism on Tuesday in Washington, DC.

The furor came to a head last month, when Facebook made it clear that ads for news stories involving political themes would be included in a public database it recently launched. The database, which is designed to be a central location where anyone can see who pays for individual ads, is a key part of the company’s attempt to deal with criticism that its ad platform was used by Russian trolls during the 2016 election. The News Media Alliance sent a letter saying the move could lead to a (further) loss of trust in the press.

On Monday, seven media organizations—including the NMA, the American Society of News Editors, the European Publishers Council, and the Society of Professional Journalists—sent another strongly worded letter to Facebook with similar complaints, writing: “Placing news ads in an archive designed to capture political advertising [is] another step toward furthering a false and dangerous narrative that blurs the lines between real reporting from the professional media and propaganda.”

In a speech at the Washington event, co-sponsored by the Tow Center and the Open Markets Institute, Times CEO Thompson echoed this criticism, saying: “When it comes to news, Facebook still doesn’t get it. In its efforts to clear up one bad mess, it seems set on joining those who want blur the line between reality-based journalism and propaganda.” Tow Center Director Emily Bell called the decision to classify promoted stories as ads “a disastrous misstep for [Facebook’s] relationship with publishers.”

In their letter, the seven news organizations said the company should exempt certain high-quality publishers from the decision. But it doesn’t sound like Facebook has any intention of doing so, judging by comments from Head of News Campbell Brown at the event. Brown said that, after criticism from publishers, the company plans to put promoted news stories in their own database, separate from traditional ads, but that being exempted from the plan altogether was not an option. Any publishers who don’t want their stories to be categorized in such a way, she said, should stop advertising on Facebook.

How is North Korea more trustworthy than Iran? That’s the most puzzling aspect of the US-North Korea, um, words fail me. Agreement? Negotiation? Bromance? No, not bromance, let’s not trivialize this more than it’s already been trivialized.

It can all be summed up in two words: Obama Bad.

Here’s a US president who campaigned against the Iran nuclear agreement, the “worst deal ever,” and then hands North Korea, which actually HAS nuclear weapons, everything it wants–and all that without even an iron-clad pledge to get rid of its nuclear weapons, much less its ability to produce them. Here’s an assessment from the sober-sided Foreign Affairs magazine that tries really hard to be even-handed, but fails.

Of course the two situations are not comparable at this point, because the Iran deal was carefully negotiated over two years of multilateral talks, and the North Korea deal is not yet in place–that process is just beginning. Let’s stipulate that whatever we think of all this, negotiations are always better than open warfare, but it’s still important to examine the framework of the negotiations.

So let’s look at the starting points. The goal with Iran was to prevent it from making nuclear weapons. The end result of the negotiations was a detailed accord with pages and pages of restrictions and inspections to ensure that this would be accomplished. Are the terms perfect, a guarantee? Of course not. The very term “deal” means that neither side got everything it wanted. After the deal was signed, there was supposed to be progress in the form of international relations and commerce–a way of ensuring that Iran would have no interest in producing nuclear weapons and muck the whole thing up again. To all out detriment, that never happened.

But the starting points are nowhere near similar. The world negotiated the deal with Iran. The US is dealing with North Korea unilaterally, allowing Kim to play powers off against each other. The goal in the Iran talks was to prevent Iran from producing nuclear weapons and dismantle its ability to do that. The goal with North Korea is “denuclearization,” an artificial and nebulous term that everyone knows means one thing to the West and something else entirely, much less, to Kim. And all the steps apply not just to North Korea but to the “Korean peninsula,” a moral equivalency that suddenly downgrades the US-South Korea alliance. Coupled with his dissing of NATO, does that give any pause to Trump’s many supporters in Israel about his reliability when it comes to long-standing alliances?

Keep in mind that North Korea is a giant step ahead of where Iran was–it has already tested nuclear bombs. Iran never built one. And the critics of the Iran deal, especially Trump, wailed long and loud about the fact that it didn’t include restrictions on Iran’s missile program. North Korea is far ahead of Iran on that, too–yet guess what’s missing from the stated parameters of the negotiations that will supposedly follow this summit?

So what’s going through the minds of the Trump administration and its millions of supporters who cheered as the Iran deal was cancelled and cheered again over their leader’s TV-triumphant but superficial and results-light meeting with Kim?

It all boils down to that. From the day the Senate Republican leader said straight out that his only goal was to torpedo any move President Obama wanted to make, and then did his best to accomplish that goal–the “policy” was in place. Undoing the “Obama legacy” has been the main thrust of the Trump government in all its branches. Just as Senate Republicans voted against their own proposals as soon as Obama supported them, so every Obama move is inherently evil to them and must be cancelled.

The utter bankruptcy of such a philosophy, if one can insult the concept of philosophy by calling it that, is obvious. And in case it isn’t, consider this:

The best way to approach North Korea would have been to start with a working Iran model in place. Not the Libya model, not the Pakistan model. An Iran model. (That would have required the US to actually try to implement the accord in good faith, which it demonstrably did not.) Then the US could have teamed up with its partners from the Iran negotiations and move on to North Korea.

Look what we have instead. The US going it alone, dissing its allies, embracing despots, and doing photo ops while giving away the ranch. And all that for Obama Bad.

Here’s a clear sign of what’s wrong with America–the host of the Tonight Show, a mainstream program if there ever was one, calls the President of the United States a “douchebag” in a monologue ostensibly about the Singapore summit and the G-7.

Just like the New York Times, they’ve chosen their audience and pander to it with outrageous remarks and name-calling. There’s no comedy here–just applause lines for the faithful. There is a serious case to be made, for example, for having Russia back in the world’s leading economic forum…but because it’s Trump, we can’t discuss it.

And a few short years ago, anything Obama said was automatically rejected. Same-same. This is big trouble. And as if you need to ask, yes, I am strongly opposed to Trump and everything he represents.

Both sides need to wake up to this. Or else. 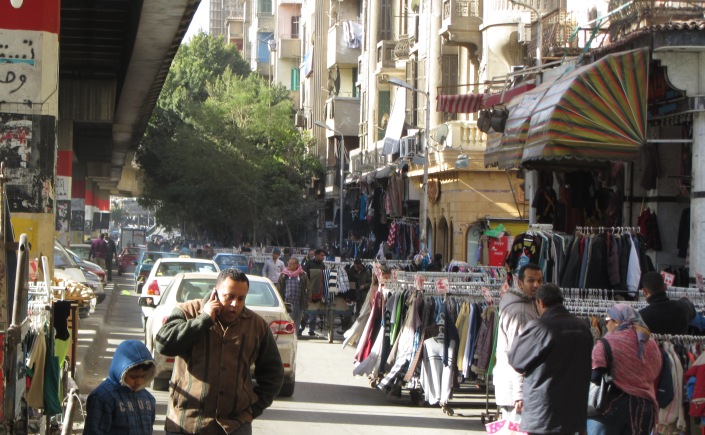 Egypt’s economy continues to make strides in the right direction. Here’s the latest from my friend and Cairo colleague, Tarek El-Tablawy.

He doesn’t write–but I will–that the only type of government that could take drastic but necessary steps like this is a strict dictatorship. That’s what Egypt has now after its failed attempt at democracy. Its first-ever elected president was thrown out of office by the military after only a year in power–and what those who cite that event usually ignore is that the coup followed demonstrations by millions against the failures of the Muslim Brotherhood president and government.

rights violations and mass imprisonments that followed the military coup in 2013. These should not be ignored, but they are not the whole story, either.

The failures of the elected government, which led to the second mass popular uprising in Egypt in as many years, were nothing compared to the economic upheavals in Egypt today, upheavals that are proceeding relatively quietly because the president (dictator) has everyone scared sh*tless. It ain’t pretty, but it works.

Is the regime of Abdel Fattah el-Sisi more harsh and oppressive than it needs to be? Probably. Will Egypt ever achieve the democracy that its educated classes and human rights workers crave? Maybe. But everything depends on the state of the economy. A nation in which 40 percent of the people live near or under the international poverty line of $2 per day per person can’t start thinking about democracy. First it needs economic stability.

El-Sisi has taken some wrong steps on the economy, but the overall direction is positive. The quicker he succeeds, the quicker Egypt can graduate to a more liberal regime. So let’s keep out eye on the ball here–let’s talk about the most important issues, not just human rights violations.