When it comes to Syria, Russia is doing what it always does–supporting the Assad regime. That’s

missing from news coverage of the Obama-Putin meeting. The problem is that reporters don’t have a grasp of the context and history.

It’s being played as a spat over the leadership of Syria–that much is at least partially true–and over how to deal with ISIS. But in the context of Russian policy, ISIS is a minor irritant, as long as it can keep Syrian President Bashar Assad in power. Putin is willing to grumble about ISIS to make Obama happy, since Obama is committed to fighting ISIS, but that’s about it.

On KQV Radio in Pittsburgh a few minutes ago, I told host PJ Maloney what I think the US should actually be doing instead of training fighters–and that’s helping the refugees.

I wish my colleagues in the world of journalism were capable of realizing that a story does not begin when their feet touch the airport carpet. That might require reading (gasp) a book (gasp) or something equally disgusting, like talking to an expert or two before writing, or preferably, before boarding that plane over here in the first place. I’ve been saying that for decades, and now, in the age of staff cutbacks and constant deadlines, it’s not likely to change. In fact, with the closing of foreign news bureaus around the world, it’s going to get worse, as “firemen” are flown into areas like this and are expected to start reporting as soon as they get a signal on their phones, without background and basically without a clue.

“The US is toxic” in the Middle East, writes Stephen Walt, one of the most thoughtful and least 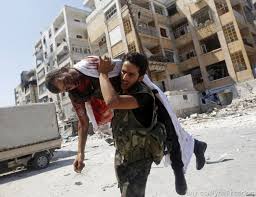 The tragedy of Syria, and limits of Western power

ideological of foreign policy experts. When he comes to a conclusion, again, that the US had and has no interest in intervening militarily in Syria, it’s worth reading his article in Foreign Policy. I’ve written this, more briefly, several times. This is a clear examination of several aspects of the problem, leading to a single conclusion–just don’t.

Israeli leaders are, as usual, looking for punishments and crackdowns to stop the renewed violence in 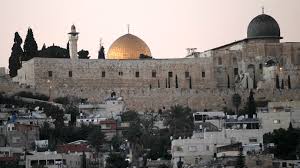 Al Aqsa has a silver dome. The gold is the Dome of the Rock. The Western Wall, the Jewish holy site, is below the two.

Jerusalem, centered on the disputed holy site in the Old City where the Al-Aqsa Mosque sits atop the ruins of the Biblical Jewish Temples. There’s no attempt, even by the supposedly dovish opposition, to urge a political solution. that’s possibly a reflection of their frustration at the failure of peace efforts that included offering a Palestinian state with Palestinian control of parts of Jerusalem. But in this analysis on KQV Radio in Pittsburgh a few minutes ago, I explain that Jerusalem tensions could trigger a region-wide war.

This would be be funny if it weren’t pathetic. My friend Nancy Youssef just reports what happened when a top US general testified before Congress on US policy toward ISIS in Syria. Then she just quotes an expert who sums it all up with that brilliant quote: “There’s only so long you can polish that turd.” 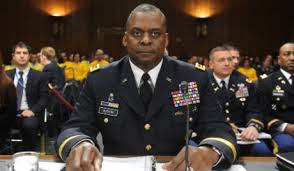 At the end of this painful article, you’ll see some suggestions by Senators about what to do instead of training fighters to confront ISIS. Nancy notes that none of them will work.

How long is it going to take before the US realizes that its military interventions are usually counter-productive, especially in this region? Probably too long. The Obama administration’s main effort to resolve a conflict by other means–Iran–triggered hysterical opposition from worst-case scenario promoters who refuse to consider the obvious truth–their alternative, war, will make the situation worse. Their scare tactics could even cause the failure of the Iran accord, and then they can say “I told you so”– as if removing all restraints on Iran, the result of such a failure, is what they really want.

But the real problem remains the outdated, outmoded and wrong-headed assumption by most Americans, and most American policy makers, that the US can just plug in some troops, or “advisers”–and international conflicts will fold like a neatly ironed tablecloth. There never was an era like that, and even if there had been, it certainly doesn’t work now.

You’ve heard me say and seen me write that the Mideast is going through a historic realignment that will take many years to shake out. This has nothing to do with the US or the West, except for humanitarian issues, like the migrant crisis now facing Europe. The $500 million that the US budgeted toward training fighters for Syria could be much better spent on humanitarian relief programs. That’s all the West can do now, while sitting back, watching the Mideast upheaval and protecting its own security.

Chances are you’ll see me writing that again. And again.

ALL the Syrian irregulars trained by the US to fight ISIS have been killed or captured. That’s the lead in this

biting analysis of the failed US program military in Syria. Even the Senate hawks are coming to realize that this was not a good idea. But the article falls short–it doesn’t explain why this didn’t work. From here the explanation is clear. It didn’t work because direct US involvement in Mideast conflicts brings about its own failure. Every time. The US needs to let things play out here on their own. It won’t be pretty, but there is no role for the US (and the rest of the West) to play except for helping out on the humanitarian side. Let’s hope that doesn’t get lost in all the partisan bickering and paternalistic haughtiness that have marred the effort up to now.

When this comes from Efraim Inbar, it’s notable. He makes the case here that others, including me, 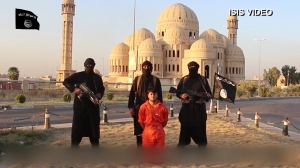 have been making, that ISIS is not a serious threat to Israel or the Western world. It’s notable because Prof,. Inbar is generally hawkish in his views. I’ve known him for decades, used him as an expert for articles and discussed policy at length with him. He’s not an ideologue–he’s an expert with a point of view. So when he analyzes the ISIS threat and comes to a conclusion like this–it’s worth reading. The only “tell” is that he blames the US for overselling the ISIS threat to the world as a way of promoting Iran as an alternative–instead of pointing the finger at his own prime minister, Benjamin Netanyahu, for using ISIS to scare the hell out of his own people, which is what he does to stay in power. 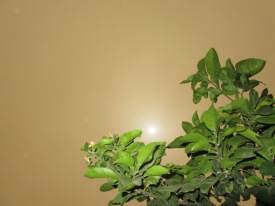 By coincidence, most of Israel is covered today by a dust storm, a cloud that wafted in from Iraq and Syria. Normally at this time of year, the skies are bright blue and the sun burns straight down from above. This view is rare in the extreme–the sun practically blotted out by the sky.

OK, conspiracy theorists, now’s your chance to go wild…coincidence? Seriously? Of course ISIS sent the cloud to choke the despicable Zionists…I wonder how long it will be till I see that on the Internet. But I’m not holding my breath…I’m not keeping this air in my lungs any more than absolutely necessary.

It’s called the Multinational Force and Observers, part of the Israel-Egypt peace treaty of 1979. It’s had little do do all these years. Now, though, about 700 American soldiers and their international partners could be in the crosshairs of ISIS-affiliated militants in the Sinai Desert. It could bring an end to a cushy, if a bit hot, assignment–but as I told host PJ Maloney on KQV Radio in Pittsburgh a few minutes ago–it might not be so easy to pull them out.