Really? The US should engage Russia militarily after Russian planes bombed an air base in Syria used by US special forces? I talked about this a few minutes ago with host P.J. Maloney on KQV Radio in Pittsburgh.

The attack happened a month ago, around the time that Secretary of State John Kerry was putting together a proposal to share intelligence with the Russians to coordinate the fight against ISIS in Syria. His critics prefer the military confrontation route, which I believe is highly misguided–just as much of US and Western policy toward the Mideast has been misguided for years and years.

It’s a mistake to take anyone’s side. One of the “good guys” groups backed by US aid just beheaded a child! Wait for my comparison of taking sides in Syria to jumping in the middle of a squabble between your kids. I have some experience with that…

The photo is a reality check by artist Khaled Akil, imagining what it would be like to play Pokemon Go in his ravaged Syrian home city of Aleppo. His point is that we’re playing silly games while his world is being destroyed.

Did Turkey’s president plan Friday’s failed coup as an excuse to take more power and purge his government and military? I discussed the coup  with host P.J. Maloney on KQV Radio in Pittsburgh a few minutes ago.

Whatever the answer to that question–the bottom line is that Turkey becomes more autocratic, more Islamic and less reliable as an ally to the West, and you hear me laugh at myself for using the silly term “foreseeable future” in that context. Live radio is so much fun…

This report on the religious reality in Saudi Arabia is is a masterpiece by my former AP colleague, Ben Hubbard. Considering how hard it is to report from Saudi Arabia, he does a thorough job.

Missing is the voice of the common person on the street–but that’s understandable, considering the restrictions reporters face there. He notes that non-Muslims, even reporters, are not allowed to enter Mecca, for example. This is a long, long article–and worth every minute of your time to read it. 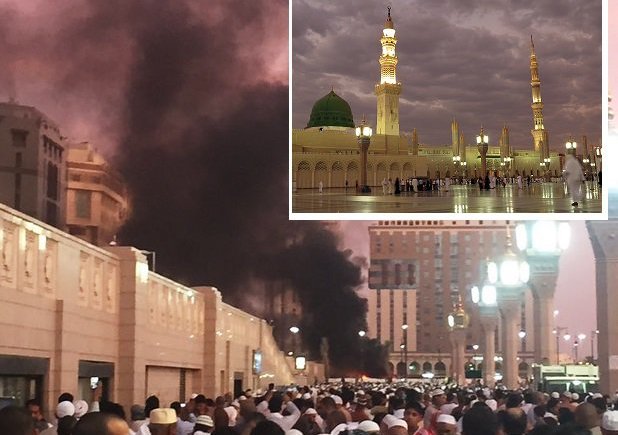 Imagine a Protestant suicide bomber hitting the Vatican. That’s the parallel of what happened in Saudi Arabia a few days ago. I discussed this a few minutes ago with host P.J. Maloney on KQV Radio in Pittsburgh.

The target was the Prophet’s Mosque in Medina. It marks the place where the Prophet Mohammad was buried. Four security guards were killed. It’s just the latest illustration of how cruel the hatred between the warring branches of Islam has become.

It became clear to me as early as 2006, at the height of the US-led war in Iraq, that the West was in over its heads there. The trigger was the bombing of the al-Askari Mosque in Iraq. The mosque was the Shiite equivalent of the Vatican. Its tall minarets were felled in that bombing, and a year later, another bombing destroyed the rest of the mosque.

I concluded then, and it’s just been reinforced, that there is no way the West can stop this conflict. The solution must come from within the people, when they’ve had enough of this hatred, when they decide that life is more important. That could take years or generations.

In the meantime, the West can try to rebuild its influence slowly and positively by aiding the people, starting with the refugees. It’s counter-intuitive to a world power to admit there’s nothing to be done in the short term–but it’s a whole new world out there, and we need to accept that and deal with it.

ISIS has claimed responsibility for a horrific suicide bombing in a market area of Baghdad, killing at least 200 people, many of them shopping for the holiday of Eid el-Fitr, marking the end of the holy month of Ramadan. Talking to host Bob Bartolomeo a few minutes ago on KQV Radio in Pittsburgh, I assessed the meaning of this.

The big picture is no more promising than the small one. Iraq remains engulfed by violence and death more than a decade after the US sent troops in to depose dictator Saddam Hussein. The main battle is between fellow Muslims–Sunnis and Shiites. As I pointed out during the broadcast, it’s not like Catholics and Protestants–they don’t blow up each other’s churches.

We also discussed the bombing in Bangladesh and what Israel does to stop suicide bombers.

This is a moving story about the chaplain who greets US war casualties and their families. My friend Nancy Youssef shows her depth and empathy alongside her critical analysis of US policy in this emotional, informative and important piece. Here’s an example:

“The Pentagon has repeatedly sought to downplay the U.S. military’s return to war in the Middle East. Officials once refused to call the death of U.S. troop shot in Iraq a combat death and last month, Pentagon officials said they would no longer provide details on the wounded, citing privacy concerns and not wanting to give the enemy information, even as such data was provided during the 2003-2011 Iraq war. But even as the Pentagon seeks to minimize the effects of war through a dearth of data and a surge of semantics, throughout the U.S. military there are soldiers like Wheatley whose jobs are to confront the U.S’s return to war.”

Take a few minutes to read the rest.